In this release, we focused on making exMon easier to use on users’ personal computers, and now we officially support querying SAP.

Below are the changes we’ve made, but we’d like to take a second to highlight our recent blog posts on exMon:

Here are the new and improved features of exMon 4.1.

With the release of exMon 4.1 exMon user accounts can be given password authentication privileges.

Password authentication allows users to log in to exMon Data Governance and exMon Portal with their exMon user accounts, without being on their AD user account.

This can be helpful if you want to open exMon to outside networks.

Our article exMon User Authentication goes into further details about this feature.

Tests have always been executed on the local machine (when executing directly with epcmd or exMon Data Governance) or on the main execution server (when executing through the exMon Portal or via schedule) and used the currently logged-in user for authentication.

This has both forced users to install drivers for specific data providers on each machine (for example Cognos and Oracle) and integrated security has not worked as expected.

To tackle these issues, Data Providers can now be configured to execute through an Execution Connection. Changing the execution will affect all tests using the data provider. 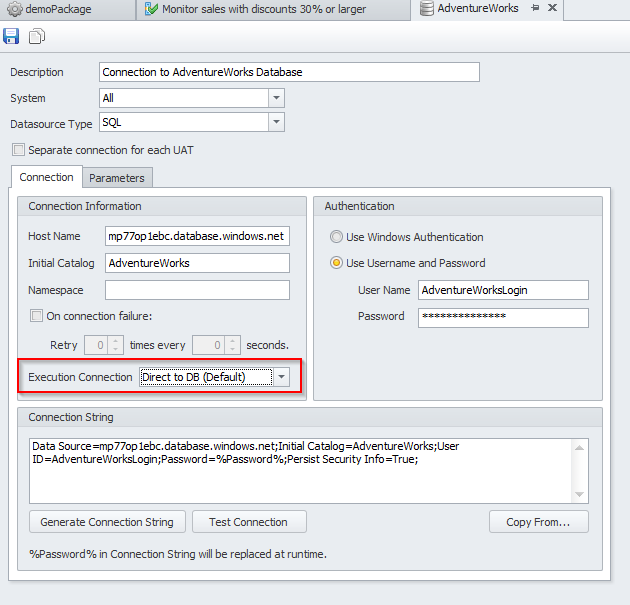 When executing through an Execution Connection, all communications with the actual data provider are handled on the execution server and executed under the service user configured on that server.

With exMon 4.1 we've changed this behaviour, so you can define under what circumstances a test is red/yellow/green on the exception map, depending on the number of open exceptions it has.

We’ve taken the first steps of supporting SAP as you can now query SAP through Custom RFC's. Please contact us if you need to query against SAP.

The exception manager now has an option to automatically create users when User Mapping is enabled.

Further details can be found under our User Mapping example

To make sure each exception exMon finds is unique and can be tracked, exMon creates a unique hash for each row using a predefined primary key that can be edited in exMon Data Governance.

If the primary key selection is wrong, it can make it difficult to add/edit columns in the test and can also lead to strange behaviour where closing one exception closes another unrelated exception.

In exMon 4.1 we add two features to minimize the risk of wrong primary keys: