In this article, you are going to read about upgrading exmon. You can see past and present versions of exMon via this article.

Things to know before you begin

Upgrading exMon is relatively simple, our exMon upgrading tool should guide you through most of it.

These are the steps you need to take: 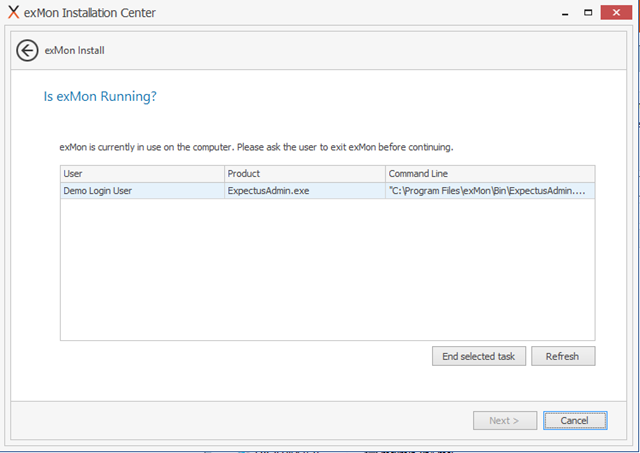 When you see this error, it is important to understand what this means.

In this case, we can see from the Product column that exMon Administrator is running so in those cases it is recommended to talk to the user running exMon Administrator and ask if you can kill it. Most of the time the user will have already saved his or her work and killing it will be a none issue.

You can also have exMon epcmd running which requires a bit more thought and knowledge of your company's processes, whether you can safely stop execution or if you need to wait until it finishes. If you are unsure, we recommend rather waiting until it finishes.

One trick to prevent the scheduler from executing new exMon epcmd instances is to disable the windows scheduler on the schedule server.

If you do this, it is very important to remember to start it up again, exMon will not execute again until you do so.

if you expect users to execute exMon from the portal, another good trick is to open the server hosting the exMon Portal and disable the exMon Command service. This will prevent users from manually starting executions until exMon has finished upgrading on the server.