With Exception Management, exMon treats each row from the results as a specific exception, logging it to a database and only notifying responsible users of new exceptions. All exceptions are visible on the exMon Portal, where users can work with exceptions and analyze trends.

This tutorial contains the following sections:

There are mainly two types of exceptions: 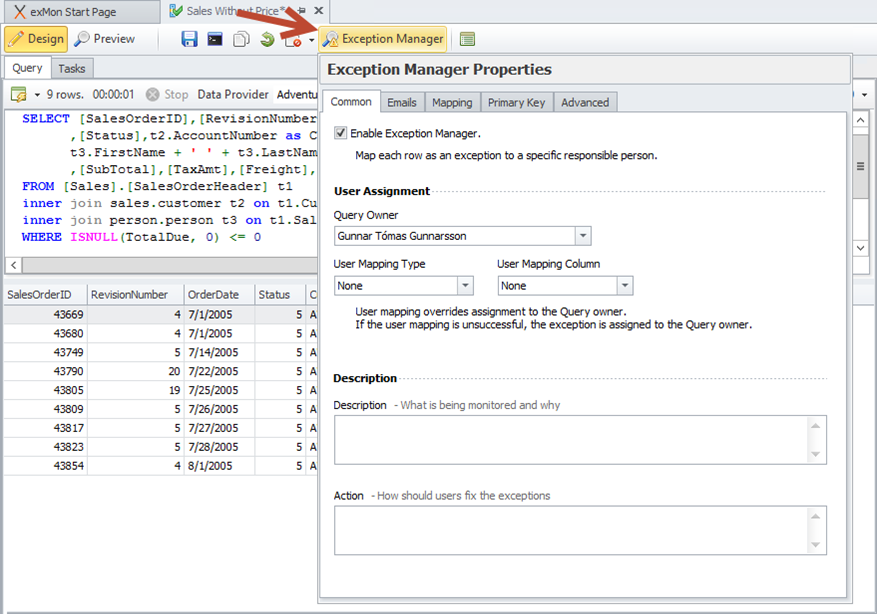 By enabling the basic functionality of exception management after running the query, users can view exceptions on the exMon Portal. There are, however, multiple options for configuring Exception Manager. This section covers each option.

You can configure exMon to assign each exception to specific users according to information in the exception data. For example, this could be a query returning all sales without a price and a column specifying the responsible salesperson.

exMon comes with three mapping types; Active Directory, Email and Expectus User Id. You can also add your own external mapping type, as described below.

After choosing a mapping type, choose the column containing the user data. After configuring user mapping, exMon will automatically map each exception to users according to the mapping. If a map is unsuccessful, that is, exMon doesn’t find the user, then the exception will be assigned to the Query Owner.

When using Email and Active Directory mapping types, you can provide the optional flag “--autocreateusers”. exMon will then automatically create users that are not found, and assign the exceptions.

If you are not able to use Active Directory or Email mapping you can specify a custom mapping type. For example, this can be used to map user ids from your ERP system to exMon.

Then, add each user to the list, by adding the source system’s id and map to an exMon user.

After adding the external mapping type, AdventureWork Sales, you can choose it from the Mapping Type dropdown in our Query.

We can test our user mapping with the Preview mode. In the Exceptions tab, you can see that exMon will assign exceptions to different users according to the data in the SalesPersonID column.

With column mapping, you can add optional attributes to exceptions that help users to work with them.

In our example below you have defined three Dimensions; Customer, Product and Sales Persons. Dimensions are created and configured in exMon Data Governance under General > Dimensions.

When defining a dimension, you need to provide a Data Provider, a query that gives us a unique id and a name, and optional attributes to categorize the dimension further. The unique id is mapped to Business Key and the name to Business Value. You then need to execute the dimension or add it to a schedule.

Below is an example of how a Customers dimension is defined and the columns mapped to the Business Key, Business Value and attributes. Each customer has a State Province Name which is in a Country Region.

For example, Carol Ann Rockne is in England, United Kingdom.

The ability to send out emails with exceptions is a powerful way of notifying responsible parties about new or open exceptions. Although powerful, it is important not to overuse email notifications as they quickly become spam for the user and are likely to be less effective.

Notify by email for:

By default, all exceptions are sent to the Query Owner. You can change that behaviour with User Mapping, as described earlier in this guide. 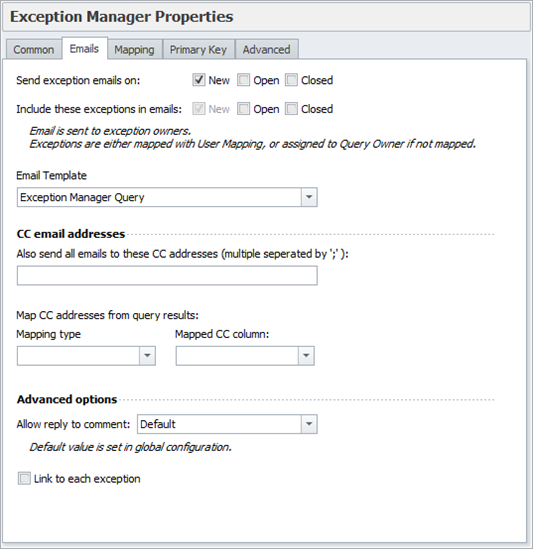 In our example, we have enabled “Send email on new exceptions”. With Preview, you can see the emails exMon will send out. 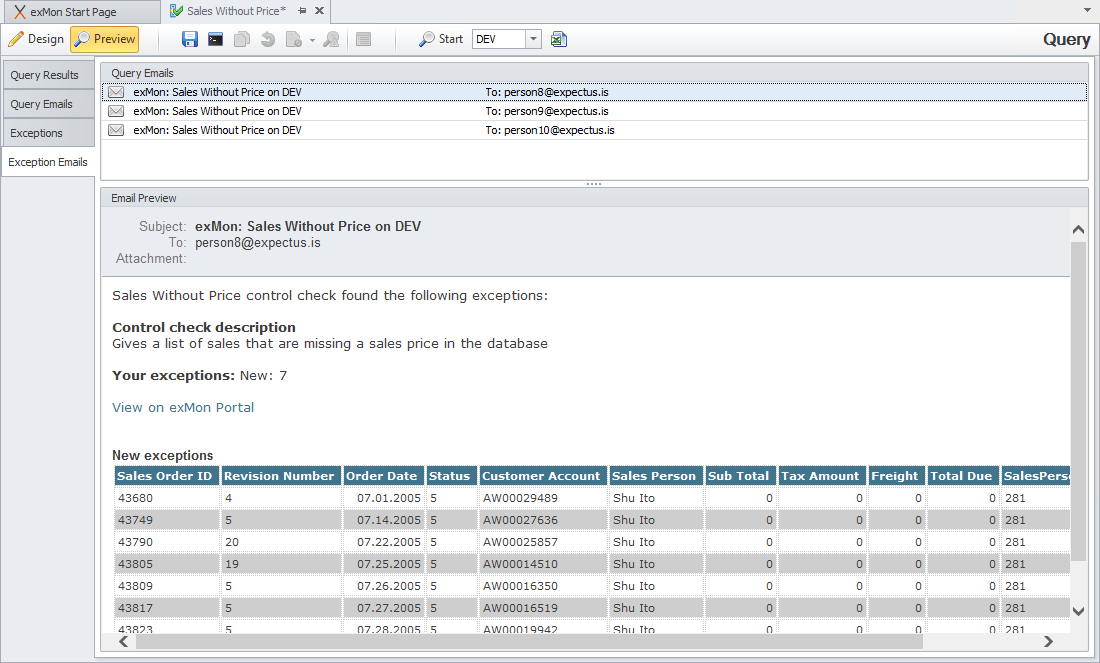 As we have enabled User Mapping, exMon will send out three emails, to our demo users: Person 8, Person 9 and Person 10, informing them of the exceptions they have been assigned to.

You can choose an appropriate email template with the Email Template dropdown.

You can customise the look & feel of your emails with email templates. To add or update a template, navigate to General > Email Templates.

Here, you can use HTML with certain placeholders to control the email generation. 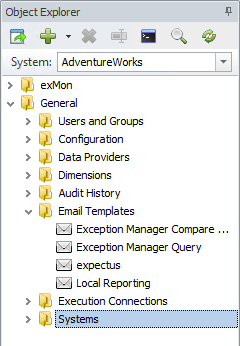 We advise you to create email templates matching your corporation’s branding. 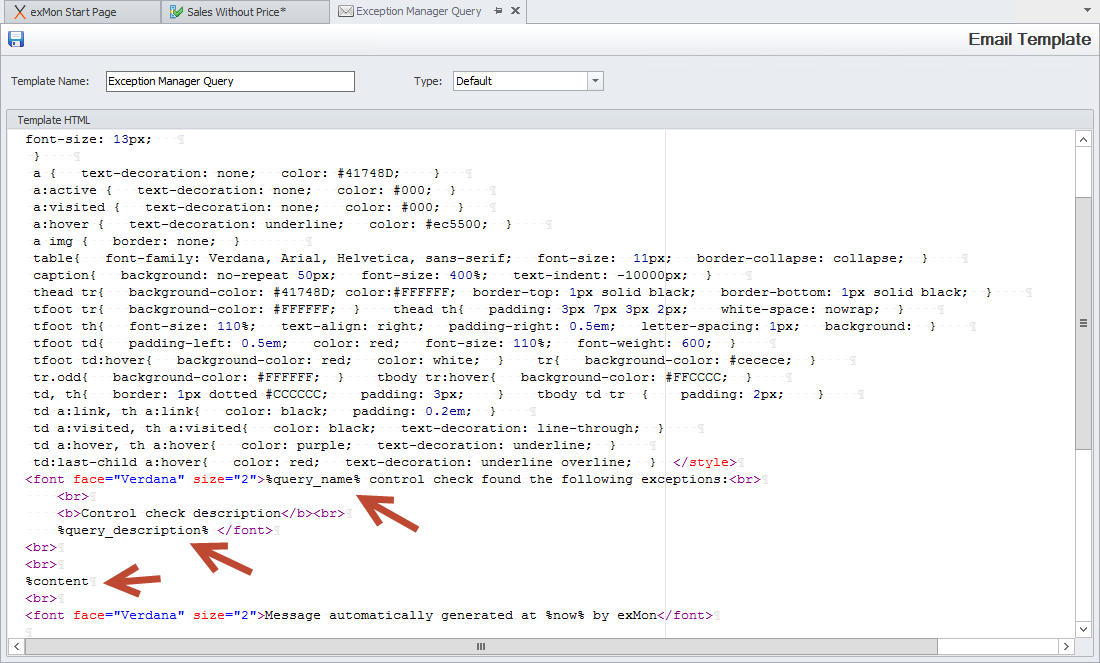 In cases when multiple users need to be notified of exceptions, you can use CC Email Addresses and CC Email mapping.

If you have a fixed list of email addresses, you can add them in “Also send all emails to these CC addresses”.

This is useful, for example, when you have a supervisor that needs to be notified of all exceptions for a specific Query. If you need a more dynamic list of email addresses, you can use CC User mapping which works in the same way as the User Mapping, described above.

There are a few advanced email options:

Allow reply to comment allows the recipient of an email, to reply to the email with a comment that will be added to the activity log of the exception. In the email, there will be two extra columns, where the user can write on reply. exMon will interpret the email and mark the exceptions accordingly.

Note: For “Allow reply to comment” to work, exMon has to be configured with a mailbox allowing exMon to receive emails. If you need help please create a support ticket

Link to each exception

When checked, exMon will add the column “View on Portal”, with a link to the specific exception on the exMon Portal. When clicked, users will get more detail about the exception, have the ability to assign it to other uses, write a comment and make other actions.

Include all open exceptions when sending email 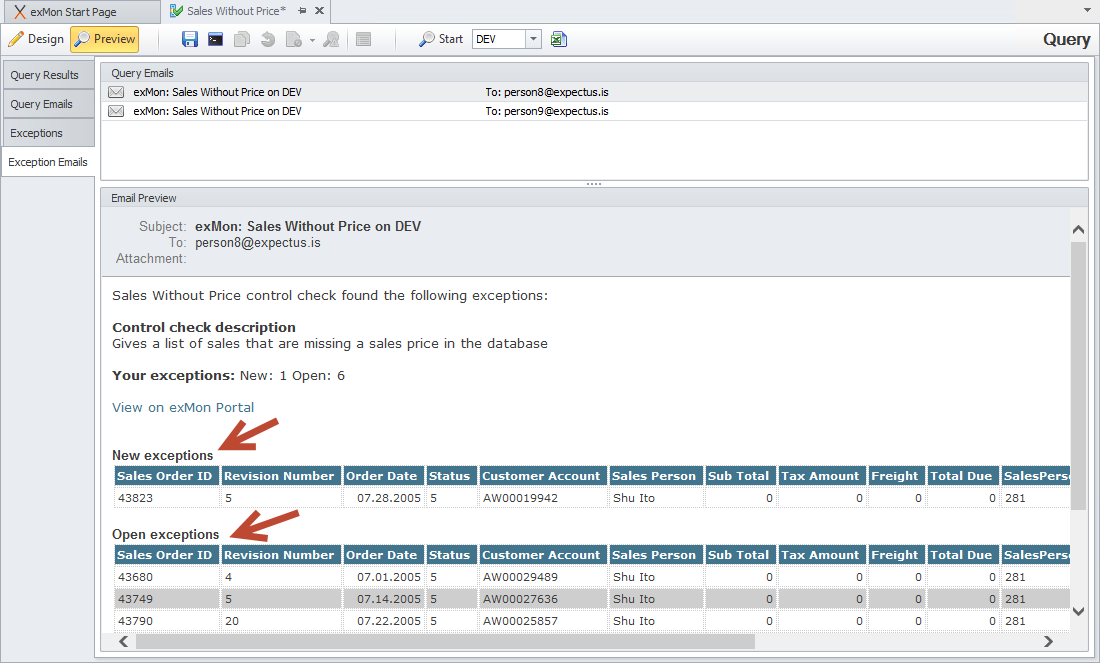 exMon tracks each exception in the results from a Query by creating a unique primary key from the row. It is important that exMon creates the correct primary key so that it is able to identify each exception and track its lifespan.

With a wrong primary key, marking an exception as “Not an exception”, could cause some new exceptions not to show up, as exMon will interpret this as that the exceptions have already been closed. By default, exMon selects all columns, except the ones mapped to Amount and User.

We highly recommend defining a custom primary key, from the set of columns that make up a unique key. In our example SalesOrderID is sufficient. In other cases, you could choose multiple columns, for example, SalesPersonID and Date column.

When a Custom Key is defined, it makes it easier to add an additional column to the exception at a later time. If the Primary Key is Automatic, then adding new columns would recreate the key of all open exceptions, resulting in closing them all and reopening them as new exceptions. With a Custom Key, you are able to add columns without changing the key. 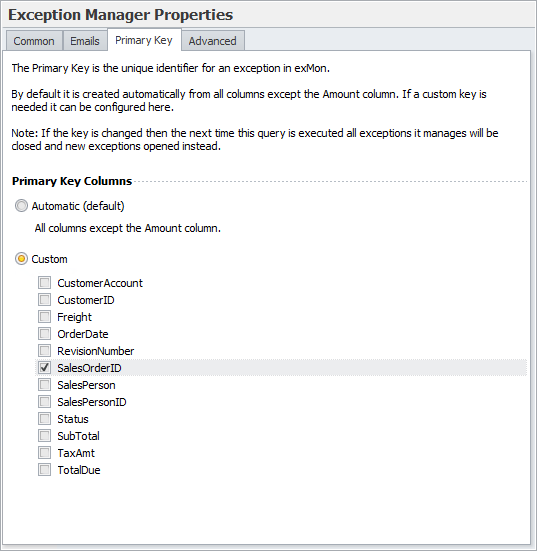 There are a few advanced options that can be useful in some cases. 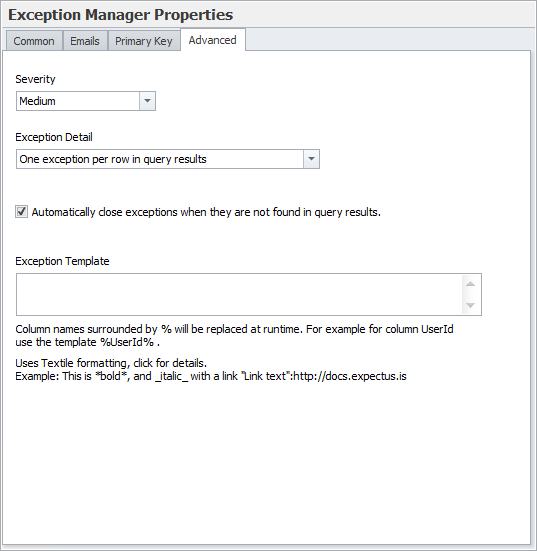 Normally, each row from the Query is handled as an individual exception. With Exception Detail, you can configure exMon to only create one exception if the Query returns results. This can be useful in cases where there is a single reason for all the exceptions, and it can be fixed all at once.

You can also automatically close Exceptions when they are not found in the query results. This is a key feature in exMon and by enabling it, exMon will automatically close (mark as fixed) exceptions that are no longer found. This saves users time and gives a clear picture of the current status of open exceptions. Enabled by default, this can be disabled if you prefer. Cases to disable this feature include when the Query is monitoring only the past few days in transactional data.

When developing Queries you often need to “start from scratch” and clear all exceptions. To clear exceptions use the “Clear Exceptions” button in the toolbar. When clearing exceptions, all exceptions that this Query has created will be deleted from exMon and the Query will start fresh on the next execution.

You can choose to clear from Dev, Test or Prod.